This is a fan wiki for Twilight Mirage, the so-called Season 6 of Friends at the Table. Friends at the Table is an actual play podcast about critical worldbuilding, smart characterization, and fun interaction between good friends. Listen at friendsatthetable.net, follow the Twitter @Friends_Table, and become a patron of the show at friendsatthetable.cash.

Twilight Mirage takes place in the same universe as Friends at the Table's Season 2, COUNTER/Weight, but after 30,000 years have passed. It uses The Veil, Follow and Scum and Villainy to tell the story of the Divine Fleet and the people living within it, as well as those who leave it behind in order to seek a new home for those souls in the fleet.

It is not necesssary to listen to Season 2 in order to enjoy Twilight Mirage, as only broad concepts from that season were carried over. If interested, new listeners can read a summary of those concepts here.

The Divine Fleet is a utopia in decline, facing possible extinction. At its peak, it contained three hundred of the intelligent, powerful 'robot gods' known as Divines. About a thousand years ago, that number started to dive. Three hundred years later, it stabilized to around eight, and in the last couple of decades it has dropped down to just two.

The show opens on the day of the death of the second to last one.

The main ships, each one created by one of the friends and home to one of the player characters, were each once home to a Divine, but no longer. Nearly all of them have perished in some way, and each ship has lost some function they once contributed to the fleet while a Divine was present.

The first half of the season features the Beloved Dust and the crew of Myriad. The Beloved Dust, with GM Austin Walker and players Ali Acampora, Jack de Quidt, and Janine Hawkins, play to find out what happens among these very ships. The crew of Myriad, with GM Austin Walker and players Andrew Lee Swan, Art Martinez-Tebbel, Sylvia Clare, and Keith J Carberry, travel to Quire, a planet that could be a new home for the now-failing Divine Fleet.

In the second half of the season, the Notion, with GM Austin Walker and players Sylvia Clare, Andrew Lee Swan, Ali Acampora, Art Martinez-Tebbel, Jack de Quidt, Janine Hawkins, and Keith J Carberry, try to find stability in the shaken Quire system post-Miracle as various factions vie for control of the area. 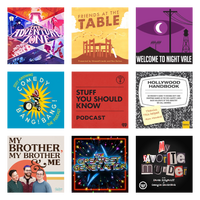 Keep track of references to past episodes

The Adventure Zone • Bhaskar Bose(hi) • Comedy Bang! Bang! • Dungeons and Daddies • The Flop House • Friends at the Table • The Greatest Generation • Hollywood Handbook • My Brother, My Brother and Me • My Favorite Murder • Nerd Poker • The Penumbra Podcast • The Podcast Database • Stuff You Should Know • We Hate Movies • Welcome to Night Vale

Want your community included? See how!

Community content is available under CC-BY-SA unless otherwise noted.
Advertisement